Congratulations to everyone who was nominated, and of course, to this year’s winners.  Many thanks to our hosts, judges, partners and sponsors.

The night was fun and again congratulations to the winners. After all that fun I ended up in bed tired and ready for dream land.

Thank you again AIM for having me. Thank you to the readers for checking up on me online last night and for reading this post now. From yours truly, Tam.

I received yet another nomination for my single PREACH! Thank you all for your love this was my second musical nomination so far for the track! We can only rise some more from here on out!! 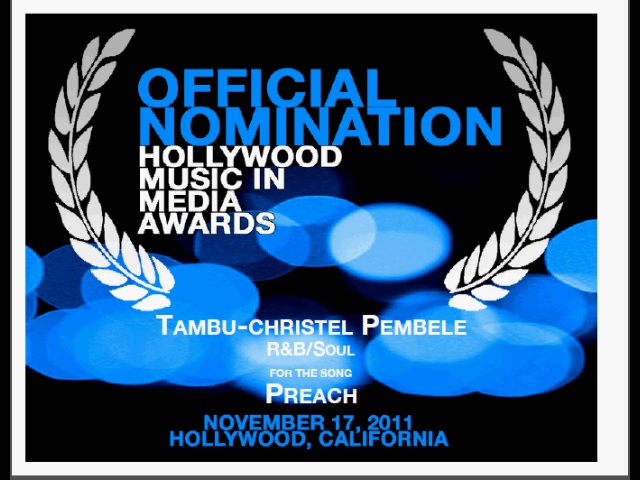 My first ever award nominations in music, the 2011 HMMAs!! I was nominated for Best RnB but I couldn’t attend for medical reasons but my spirit was with them all the way and I twitted like a crazy woman trying to catch up on what was going on! I am blessed is so many ways that i really do wish the other artists who were also nominated a lot of success. I know i will be successful when the my time comes!

This is one of the biggest events in the Hollywood scene when it comes to music used in the media industry, and trust us, there’s few events that are going to feature as many talented individuals as this does.

If you work in the industry or you’re a member of the press, grab your best clothes, a camera and your biggest smile for one of the most enjoyable events of the California calendar. Showcasing some of the brightest and best in musical creation for media, the event will highlight the achievements of those who want to improve the musical media landscape.